Welcome to our new digs! Brian and I have decided to put our verbings together into one repository. We did this for several reasons:

This project is mostly about Item 3. Brian has a solid background in computer science, including networks and HTML, so he’s known for years how to run a web server. I have a less solid background (e.g., dated) but a half-decent understanding of how the internet works. So, we’re using this opportunity to broaden our skill base. He’s going to run the web server and the back end of our new site as well as contribute verbings, and I’m going to customize the layout and contribute lots of verbings. We’ll both work on the overall appearance. It’ll be boss.

To start, he registered our new domain name and set up our server. I’ll admit that I’m still fuzzy on the nuts and bolts, but what he’s shown me from a command-line perspective is really cool, because Linux. He’s learning more and more as he goes and is teaching me along the way. For my part, I’m refreshing my ancient knowledge of HTML and learning to use Cascading Style Sheets (CSS), which will allow me to tweak the site design. We’ve spent all weekend working on this stuff, and it’s ridiculously fun.

The whole thing came about because I didn’t have the option to right-justify the banner text or adjust the size of my Wolfie picture for the static image on my old blogspot site. 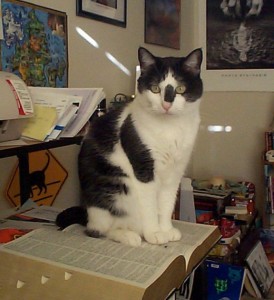 The late Wolfie: smart cat was smart. And spotted.

I told Brian I was thinking of looking into WordPress; off he went, and here we are. He goes all-in when it comes to helping me, which is one of his many outstanding qualities.

The site is new and we’re still adding things, so keep an eye out for a landing page in the near future. It will include links to our social sites and an explanation of our domain name, among other things. The appearance will probably change more often than Sleeping Beauty’s dress color for a while, so hang in there. We think it’ll be worth it.