It’s Monday again already. How the devil did that happen? We were rocking along, it was the weekend, we had some creepy weather, we did some laundry, we watched the new James Bond film, and then bang! Smacked in the face with a workday. Unlike weekends, weekstarts just never get easier. At least I get to visit with the lovely Joanne during the few breaks I can squeeze in between crises. She helps keep me sane by protecting me from unwelcome social interaction and by encouraging my verbivore habits. Case in point, my bowl o’verbs. 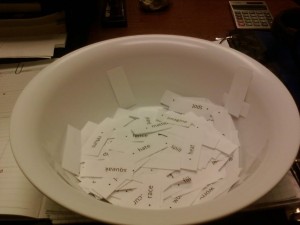 I’m 2 for 2 at insinuating the daily verb into an official email. Today’s verb was strip. Go me!

At any rate, I was at a loss for what to write about tonight until I read Brian’s post for today. I shamelessly love the way he writes; it’s one of the many reasons I fell in love with him. He made some very good points in that post, too, which got me to thinking. Most of the thoughts running through my head while reading consisted of “yeah, dang right,” but I was actually serious about my comment to him. We really could be facing the Zombie Apocalypse already, so, in the spirit of civil duty, here are some tips for facing the zombie horde of today.

Polite Avoidance. Modern zombies increase their population by snagging uninfected humans in painfully boring conversations about how much their lives suck. They are the very soul of negativity and taint everything they touch. The best way to avoid them is to either carry a huge workload, or pretend that you do. “Sorry, I really need to get going on the seven new projects we received this week,” will free you every time because the attackers mistakenly believe that with that much work to do, your life must suck as much as theirs. First rule of thumb: Zombies never eat their own.

Positive Redirection. Pardon my use of anticipatory construction here, but; if there is one thing the typical modern zombie can’t stand, it’s someone else having a good day. Again, pretending is a perfectly valid escape tactic, even if you’re really circling the drain towards the eighth circle of hell. When an attacker shambles at you whining about his duties, his paycheck, or the price of gas, subtly shift the conversation to something positive, like so: “Wow, that’s tough, Ralph. Did you hear that our biggest teammate specifically requested me to work with them on the new project? How cool is that?” Although this method aggravates the offender, it has the added perk of making them resolve to stay away from you. Second rule of thumb: Zombies never, ever want to hear about you.

Child Appreciation, or the No-Kid Card. Many, and I do mean many, modern zombies love to trap the unwary victim by endlessly complaining about their own children. And if that fate weren’t horrible enough, they alternately flog the listener for not having any kids, or for not being as time-management challenged as they themselves are. This attack consists of freakishly illogical phrases like, “Gawd, my kids are such a pain, I never have time to do stuff for me…but I just can’t believe that you don’t have any, Smartperson! Children are a precious gift!” If you find yourself in this hideous situation, you can do one of two things: (1) Tell them that the planet is overpopulated already, and you don’t want the guilt of introducing another smart person who would have to deal with the overwhelming pile of stupid that humanity produces; or (2) Wax poetic about how wonderful children are and why you just can’t imagine how so many people can blame their kids for their own failure to live the life they really want. Both of these options will incense the attacker, but he or she will go away. Never, ever tell them that you can’t have kids, even if it’s true; this tactic causes sympathetic crooning, which will cut off your escape. Third rule of thumb: Zombies always think of the children.

And there you have it. I know it’s hard to remain happy and productive when surrounded by the walking (mentally)-dead, but hang in there. Just follow these three basic tactics, remember the rules of thumb, and never stand between a zombie and its chosen source of caffeine. You’ll be just fine. Just…fi…nnnnnnnngh.~H