I’ve learned a lot about myself on my many cycle rides over the past few years: how far I can push myself before my legs give out, how anger at the wind can drive me to overcome it, how much I value (and need) the serenity of a quiet morning with just the sound of bike tires and birds. I’ve also learned a lot about other people, though the teachings haven’t been nearly as positive (or as much fun for me.)

I’ve always known that fat guys like me are inherently mockable. I’m not whining about it; it’s just a fact that society sees fat guys (and gals) as easy, low-hanging humor-fruit, ripe for picking. I’ve been teased, mocked, and belittled since I was a preschooler. Everyone from family to friends to teachers to co-workers to enemies have all, at one time or another, proven unable to resist the tasty fruit of bagging on the fatty. That’s life and that’s not what this post is about.

What I didn’t know is that fatties are threatening. I terrify people. It becomes even more apparent when you put me on a bicycle. I would have thought this would increase the public mockery. After all, I look like a seal on a toadstool; I’m a bit top heavy on a bike and I’m sure I cut a very silly silhouette. It didn’t though. It made people angry. It made them angry enough to go out of their way to attempt to physically harm me. They have occasionally succeeded.

I have a pretty long standing policy: Don’t Engage the Trolls. That’s how I’d phrase it today, but it comes from when I was a kid, when I learned early on that the best way to deal with the abusive attentions of the more malicious members of Homo Sapiens was to simply ignore the behavior. That policy was a godsend in the dawn of the internet, and led to a bunch of great times, including the series of events that culminated in my meeting and wooing Heather. It’s continued to serve me well into my middle age.
I bring it up because that’s why I generally don’t post on Facebook or this blog whenever someone acts like an ass to me. It’s unproductive. It won’t get the person to change their behavior, and it won’t make me feel better, so why waste time giving any thought to it?

You Dropped Your Drink, Dink 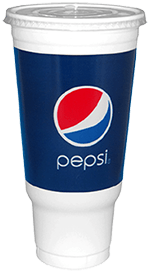 On this morning’s beautiful ride, Heather and I had a minor encounter with a car full of Duncan’s Finest Teen Spirit. They pulled up next to her and screamed at her to try to force her off the road, then pulled up next to me, screamed again, jerked the car towards me as if to hit me, yelled “Get off the road, fat-ass!” and hurled a 44oz cup of Dr. Beetus at me. It missed. As they sped forward, I informed them that their effort was mediocre and invited them to come back to try again. Of course, being teenagers, they weren’t expecting this. They stopped the car and considered, then decided that we weren’t worth the time and sped on with 3 middle fingers extended from the car windows.

Now ordinarily, I wouldn’t have batted an eye. They missed with the drink. Heather and I heard them coming, so we weren’t scared. They were too chicken-shit to actually run us off the road. They were just bored, angry teenagers looking for someone or something to do to make themselves feel less empty.

The Dogs of War 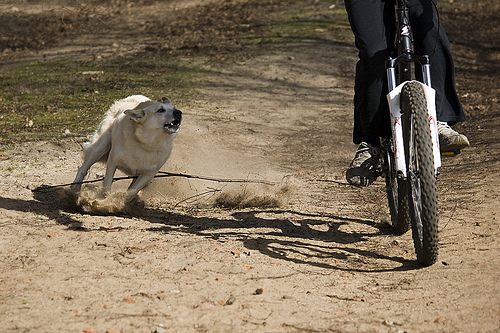 On three other occasions while out riding, I’ve had significant dealings with dogs. I’m not talking about a dog chasing along behind, barking. I mean the full 9 yards: tail straight back, snarling, teeth bared, full speed running, etc. On one of those cases, it was just a stray dog, and when he got close enough, I was able to persuade him to move along with a lucky swat of my foot.

The other two times, the dog was intentionally set upon me by its owner.

In each case, the goal of doing so wasn’t immediately clear. I wasn’t on the person’s property, and given that I was on a bicycle, wearing riding gear (helmet, jersey, shorts, gloves, etc.), I think it’s reasonable to expect someone to know I’m just passing by rather than scouting for burglary, preparing to rape, or sniffing out meth labs.

Nonetheless, the two owners (one male, one female), set their respective dogs on me while yelling attack commands (“GIT ‘IM, SIC!” and “KILL! KILL! KILL!!!!”) and shouting encouragement to their animals. Only when it became clear that I couldn’t outrun the dogs (a dog on a flat road goes a hell of a lot faster than I do) and that I was prepared to defend myself with force did the owners call their dogs back; once again with shouted obscenities informing me that I was a fat-ass and I should get off the road. Side-note-of-irony: both of these owners appeared to outweigh me.

These people were so (pick one or use your own: outraged, malicious, bored, thoughtless, cruel, shameful, Un-Christian, Christian, ignorant) that they felt the need to send their dogs to attack a passerby. Why? People only attack when they feel threatened. The idea that a fat guy might become a NOT FAT guy was so threatening to them that they actually attacked me to show me what a bad idea it was. It didn’t work. 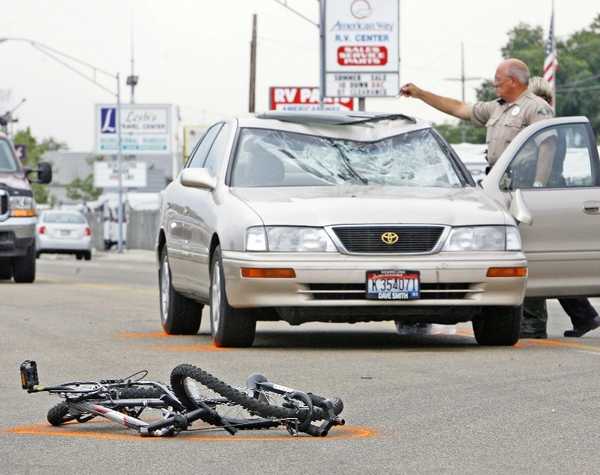 All cyclists are used to idiots in cars treating their horns as if they’re British butlers. In their minds the shrill “BREEEEEEEPP!” of an automobile horn translates to “Mr. Persimmon Holmes of Duncan, Earl of Braums.” “The Lady Elizabeth Ganges, Duchess of Main Street.” That’s no big deal. I wish people would respect the fact that their car’s horn is for sounding in the case of emergency or imminent impact, but it’s a free country. If people want to advertise that they’re mouth-breathing idiots, who am I to deny them their language of choice?

I’ve had a number of wrecks, like any cyclist. I’ve been run off the road by texting drivers, backed into by people not checking their mirrors as they pull out of church, and nearly broadsided by people who run red lights and feel it’s my fault that they didn’t come to a complete stop. I can handle all of those. Those are the same issues everyone on the road faces. The fact that they’re more likely to result in my death is due to my choice to ride a bicycle, and I take responsibility for my part of the equation.

The same behavior I’ve experienced from pedestrians (pointing, laughing, shouting obscenities) and dog owners seems to become amplified when dealing with drivers. Motorists, as a group, don’t like dealing with cyclists. To be fair, a lot of cyclists are elitist assholes when it comes to the road and don’t really buy into the whole “Share the Road” thing, which would entail actually sharing it.

That said, I do my best to be a courteous rider; I stop at signs and lights, I don’t cut off cars even when I have the right of way, and I let vehicles go first whenever possible. I signal my turns and clearly communicate my intentions and appreciation.

In return, I generally receive the horn, a middle finger, or rarely, a positive sign of appreciation back.

Sometimes, I get more. Many times, people feel it would be fun to attack, swerving their car as if they’re going to hit me, only to jerk away at the last moment. When they see that I don’t wreck and don’t look terrified, they become angry. They yell, again calling me a fat-ass, and telling me I should get off the road, as though they’re so concerned about my safety that they themselves will make the road unsafe to speed my decision to stop riding. I don’t engage the trolls, so I ignore them and pedal on. The obscenities, horns, dogs, screams, engine revving; all of it just fades into the hiss of White Noise in Duncan, OK.

I feel sorry for these people. They’re going to spend so much of their time recounting their glorious tales, thinking often of me and laughing about their superiority. Other than writing this post, I never think about them at all, any more than I think about the other white noise on the radio as I change the channel.

It’s sad, because my overriding impression of Duncan has been so colored by these experiences. At work, I have great dealings with my co-workers. My friends are good people who care and do their best to help our society be better. But my feeling for us all as a group can’t help but be negative.

I know it doesn’t represent the town as a whole.

It just represents the town people see when they come to visit, along with the broken streets, dead trees, empty businesses, and vacant stares.

I’d like to think that our community would applaud a fat guy out riding his bike, obviously making effort, day in and day out, year after year, to better himself and decrease his burden to society. But we don’t. We react with hostility, going to outlandish lengths to make fun of, inconvenience, and in extreme cases, harm the person doing it. Why? Are we so terrified of looking at ourselves that the mere suggestion of someone else bettering themselves should be quashed?

Are people so uninspired that the best thing they can come up with to mock the fat guy trying to become a NOT FAT GUY… is to call him fat?

I expect better from you Duncan.

You can’t even be hateful with conviction. It’s pathetic.